Usually it only takes a week to take in everything and give it a proper review. In the case of the new WWE Network, a week wasn’t long enough. I wanted to wait until it was all polished and proper before giving a correct review.

The Network launched on February 24th and had fans pumped. We were all ready to have every WWE/WCW/ECW PPV at our disposal. When the network went live that morning, whether it was server, sign up or gaming console struggles, everyone was having problems. You couldn’t even give the network a proper review do to the fact you couldn’t even get it to work.

When I went to WWE.com and tried to sign up for the Network, I was denied. It said that the server was too busy and to come back. Fans on the East coast seemed to be having better luck, but not much. They were able to sign in, but were unable to watch anything. So basically you were pulling your hair out to even sign in, and when you did, watching anything was a problem in itself.

Being surprised that the Network was having issues wasn’t the shocking part. It was the fact that it took so long. I was left hanging until 3 pm ET. And that was just to sign up. I did not take advantage of the free week trial and instead just committed to the first 6 months. After getting successfully signed up, I was again left hanging. My phone (Galaxy nexus) was slow and could not load anything.

I tried to watch The Royal Rumble from ’92 and all it did was freeze. I then tried my computer only to be denied again. If that wasn’t enough, I could not sign in on my Xbox 360, and that wasn’t the worse part. It took over a week to get the Xbox 360 servers working. I was finally able log-in and use my Xbox 360 as of 3-6-14.

PS3 users had some issues, but not as bad. It was inevitable that the issues would be fixed, hence why I agreed to go on in with the buy rate instead of accepting the free week trial. I knew the issues would be a thing, just didn’t realize how long I was going to have to deal with them.

After two weeks I think it’s safe to say the Network is polished and ready to go. Sign-in and sign-up takes just a few seconds, and load up screens are never a problem. You can now sign-in and watch the Network on Roku, laptops, phones (that accept it) PS3 and Xbox 360’s without any issues. I was in the middle of the desert this past weekend and still had pretty good reception for the Network. I was able to watch this past week’s NXT show as I missed it. It glitched at times, but was pretty solid for the most part.

If you’re a WWE and/or wrestling fan, this Network is for you. Even if you just watched in the 90’s or just loved the Attitude Era, you can relive some of your favorite matches and moments. Relive the birth of Stone Cold Steve Austin.

You can relive The Undertaker vs. Diesel at WM12, Bret Hart vs. Shawn Michaels in their Iron Man match or the Montreal screw job at SummerSlam. It’s all here for your disposal. The Network still offers a FREE week trial for any skeptical buyers out there. So, if you still aren’t sure, what do you have to lose? 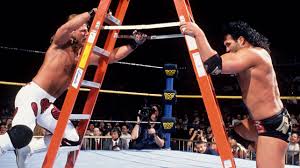 Subscribers get complete access to every WWE/WCW/ECW PPV ever made. You also get exclusives such as NXT, ECW TV, WWE Countdown, WrestleMania Rewind, The Best of Raw, Raw and Smackdown Pre and Post fight shows, and much, much more. Plus, you get every PPV starting off with WrestleMania 30 for that set price of $9.99 a month (with a 6 month commitment). You really can’t beat that. You’ll end up savings hundreds of dollars.

Watch HBK and Razor Ramon go at it in one of the best ladder matches ever at WM10, and/or then watch Shawn Michaels end the career of Ric Flair at WM24, right after you just watched Ric Flair win the WWF Title in the Royal Rumble in ’92. This is just a small example of how you can use the Network.

Did you miss an entire year of wrestling? Did you stop watching and slowly got back into it? Go back and get caught up on everything you missed. You will not regret this purchase. Die hard fans all the way to novice’s. This is for you!!!!