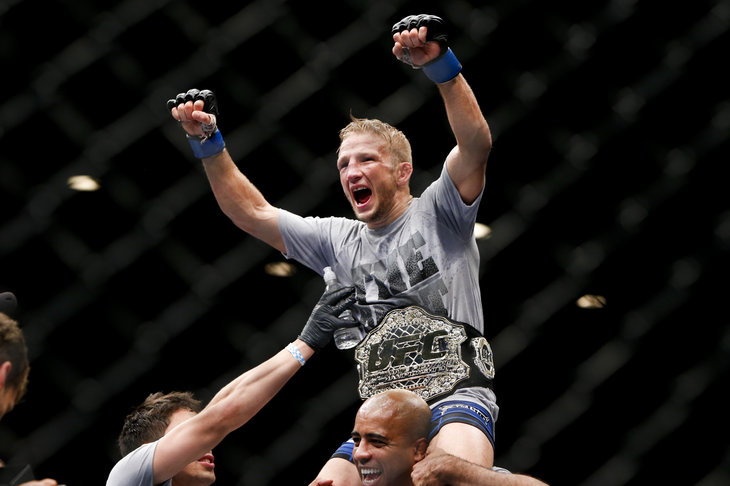 Please note that due to inactivity, Dominick Cruz is currently ineligible for the rankings. Also the rankings are decided by a panel of writers:

Having pulled one of the greatest upsets in the history of MMA, T.J Dillashaw will probably defend his title first against Raphael Assuncao. There was a mention of a possible immediate rematch with Renan Barao but that makes no sense considering the domination.

Renan Barao didn’t just loose, he was dominated at UFC 173. Dana White mentioned a possible immediate rematch but it shouldn’t happen considering how one sided this battle was. Regardless of what White’s opinion is about Barao this wasn’t an Anderson Silva fluke.

After watching his Alpha Male teammate become champion, Urijah Faber is probably inspired to face Alex Caceres at UFC 175 on July 5th. The question is what will happen if he builds himself back up to the number one contender position. Time will eventually tell.

Raphael Assuncao is probably going to be T.J Dillashaw’s first title defense assuming he is healed from his UFC 170 rib injury in a timely manner. This will be significant because Assuncao is Dillashaw’s only career loss after John Dodson who currently competes at flyweight.

As of right now Michael McDonald still has nothing scheduled and as a result his rankings position is slowly starting to suffer for it. Regardless he will need a rebound win immediately if he wants to remain relevant in the bantamweight division.

Because of his injury, Eduardo Dantes will be forced to face Interim Champion Joe Warren either during the summer series of season 11.

Takeya Mizugaki put in a good performance against Francisco Rivera at UFC 173 but he still has a ways to go before he earns a title shot.

No word as to when Marlon Moraes will defend his World Series of Fighting title next but due to the recent TV deal it might be on NBC.

For now Eddie Wineland has nothing scheduled and he’ll be looking for a rebound from his loss against Johny Eduardo at UFN 40.

Bibiano Fernandes successfully defended his One FC Bantamweight title against Masakatsu Ueda at One FC: Rise of Heroes on May 2nd.

The following fighter was voted on by the bantamweight division and as such is listed as a contender in the division: Johny Eduardo.