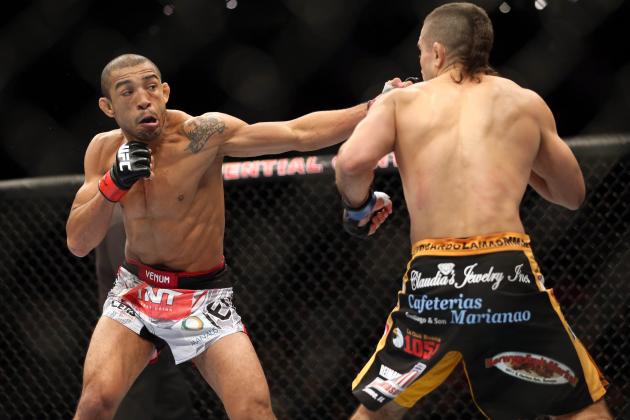 Please note that due to suspension Dennis Siver is currently ineligible for the rankings. Also the last rankings (4/24/14) are in parenthesis:

Jose Aldo is now set to defend his title in a rematch against number one contender Chad Mendes at UFC 176 on August 2, 2014. It should be interesting to see if Mendes will be more challenging for Aldo or whether Aldo will be going for the finish for the first time in a while.

It’s taken two years and a five fight win streak for Chad Mendes to finally earn his rematch with UFC Featherweight Champion Jose Aldo. During that time he has probably been preparing for the rematch and should have learned something from the first encounter.

Ricardo Lamas is getting his rebound match against opponent Hacran Dias at UFC Fight Night: Swanson vs. Stephens on June 28, 2014. This particular fight card will leave people with a good idea about who Jose Aldo’s next opponent will probably be, but time will tell.

It will have been almost a year but Cub Swanson will finally step back into the Octagon at UFC Fight Night 44 against Jeremy Stephens. However, Stephens will not be an easy opponent as he’s been on a roll and a win could put him in the featherweight rankings.

Frankie Edgar will fight BJ Penn exactly a year to the day of his last match on July 6 at The Ultimate Fighter: Team Edgar vs. Team Penn Finale. Since both men have been acting professionally towards each other we shouldn’t expect any bad blood between the two.

His Fight of the Night performance at The Ultimate Fighter Nations Finale has established Dustin Poirier as a legitimate contender.

Nik Lentz’s rebound win against Manny Gamburyan has reestablished Lentz as a contender though some more wins will be needed.

After his rebound win Clay Guida is going for a quick turnaround against opponent Dennis Bermudez at UFC on Fox 12 on July 26, 2014.

Chan Sung Jung also known as “the Korean Zombie” still does not have a set return date and his ranking continues to suffer for it.

Having won his title back, Pat Curran will be defending it during the Bellator 2014 Summer Series at Bellator 121 on June 6 against “Pitbull”.

The following fighters received votes for the featherweight rankings and are listed as contenders: Jeremy Stephens, Dennis Bermudez.