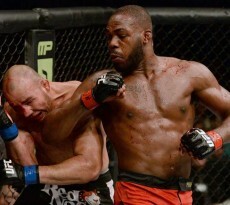 Please note that due to inactivity, Antonio Rogerio Nogueira is ineligible. Also note ranks are voted on and previous ranks are in parenthesis:

Jon Jones went out and controlled Glover Teixeira in a way he hasn’t experienced in his entire career and snapping a nine year winning streak. He only continued to extend his record setting run in the light heavyweight division with the victory and edge towards other records.

Supposedly Alexander Gustafsson’s win against Jimi Manuwa earned him a title shot but Jon Jones thinks he should face another opponent. However, Gustafsson may have to consider a back seat considering title implications with Cormier versus Henderson at UFC 173.

Glover Teixeira’s face was a bloody mess after his fight with Jon Jones. The question is where does he go from here since he was on the receiving end of such a one sided defeat. At this point he can only be considered another statistic on Jon Jones victims list.

After a one sided tune up light heavyweight debut against Patrick Cummins, Daniel Cormier will now be facing Dan Henderson at UFC 173 for a possible title shot. The real question is how the lack of a TRT exemption will affect the continually aging Dan Henderson.

The injury that put out Rashad Evans from his UFC 170 bout with Daniel Cormier has sidelined him until sometime in the fall of this year.

Dan Henderson doesn’t seem to be phased by his banned TRT exemption as he’s heading into a UFC 173 match with Daniel Cormier.

Because of injuries sustained by opponent Wanderlei Silva during their on set brawl, Chael Sonnen will next fight at UFC 175 on July 5th. A big question is how the lack of TRT will affect Sonnen who has said he may have to retire from the sport because of the TRT exemption ban.

Mauricio “Shogun” Rua’s loss to Dan Henderson resulted in a broken nose which required surgery and set returns on hold for the time being.

While Anthony “Rumble” Johnson has indeed become a monster it was surprising to see him control Phil Davis the way he did at UFC 172.

The reinvented Anthony Johnson returned to the UFC triumphantly and made a statement to those in the UFC light heavyweight division.

The following fighters received votes for the light heavyweight rankings and are considered contenders in the division: Emanuel Newton.