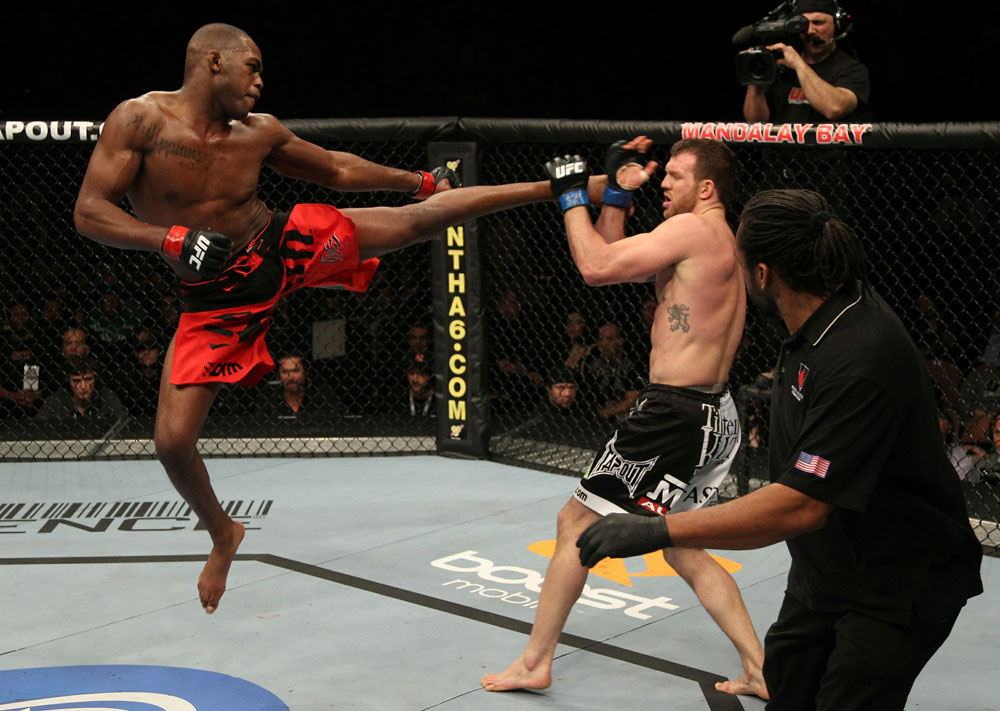 Jon Jones (left) in his match with Ryan Bader (right). Photo by UFC.

Note that due to inactivity and retirement, Antonio Rogerio Nogueira and Chael Sonnen respectively are ineligible for the rankings. Also note that the rankings are voted on by a panel of MMA Freak writers. Lastly the previous rankings (6/1/14) are listed in parenthesis:

Jon Jones is now set to face Alexander Gustafsson in a rematch of their war last year at UFC 178 set for September 27th in three months. It’s possible that one of the incentives that the UFC gave to motivate Jones to take the fight was a match with Daniel Cormier.

The first to agree to their rematch, Alexander Gustafsson is getting another chance at Jon Jones UFC Light Heavyweight Championship. It will be interesting to see if Gustafsson will be able to duplicate the performance against Jones or whether Jones will be harder to defeat.

Supposedly Daniel Cormier earned a title shot against Jon Jones with his win over Dan Henderson but that has yet to be seen. However, the question is will Cormier be willing to sit out long enough for Jones to compete, recover, then start training for their match.

Rashad Evans is still out with a leg injury and probably won’t be making a comeback to the Octagon until sometime in this coming fall.

There is a question as to where Glover Teixeira fits in the light heavyweight division now and where he proceeds from his loss to Jones.

Anthony Johnson will now be facing Antonio Rogerio Nogueira at UFC on Fox: Lawler vs. Brown next month on July 26th.

It will be interesting to see how Phil Davis reacts to his rather lopsided loss to Anthony Johnson considering the nature of the upset win.

Dan Henderson looked extremely sluggish in his loss to Daniel Cormier and one has to wonder if it’s his lack of TRT since the ban.

Following the conclusion of Bellator Season 10, Emanuel Newton should be defending his title against Quinton Jackson in the fall. However, with Jackson hesitant to face his training partner the question of whether it’ll happen is fresh.

Mauricio Rua has supposedly requested to fight at UFC Fight Night: Hunt vs. Nelson at the Saitama Super Arena in Saitama, Japan.

The following fighter received votes for the light heavyweight division and is considered a contender in the weight class: Ryan Bader.