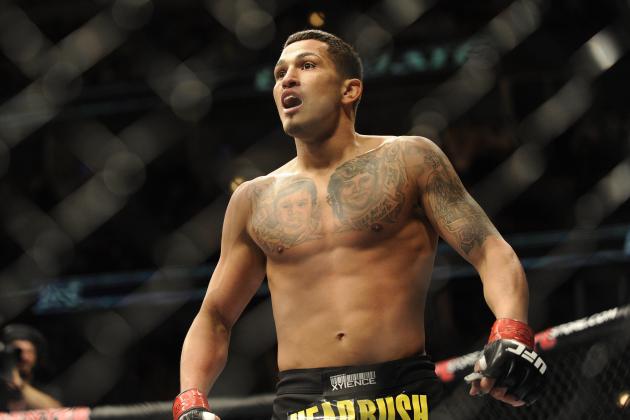 Please note that the rankings are voted on by a panel of MMA Freak members. Also note the previous rankings (5/1/14) are in parenthesis:

The date to start filming The Ultimate Fighter season 20 is supposedly July 1st but that has yet to be confirmed. Until then UFC Lightweight Champion Anthony Pettis can only train and anticipate his upcoming title defense at the end of the year against Gilbert Melendez.

Like UFC Champion Anthony Pettis, Gilbert Melendez will start filming for The Ultimate Fighter season 20 within a few months then fight. It will be interesting if there are any confrontations between his fellow Gracie Fighter teammates and the Pettis’ Roufusport teammates.

After his match against Josh Thomson, Benson Henderson has a chance to string together a winning streak against Rustam Khabilov at UFC Fight Night 42 on June 7th. However, he probably won’t get a third shot at Pettis until well into next year if he keeps winning.

Josh Thomson has been out with an injured hand but is now ready to return to action on UFC on Fox 12 on July 26th against Michael Johnson. This will probably be the first of several wins Thomson will need in order to reestablish himself as the top lightweight contender.

Currently on a three fight winning streak, Donald Cerrone will be looking to extend it to four against Jim Miller at UFC Fight Night 45.

Khabib Nurmagomedov is currently undefeated in his career having just come off a win against Raphael dos Anjos at UFC on Fox 11.

With his incredible submissions, Jim Miller has earned a match against Donald Cerrone at UFC Fight Night 45 that could propel him.

This is literally the last day that TJ Grant is eligible for the rankings until like the UFC Rankings he is considered too inactive by MMA Freak. When he will return to action and against whom is a question that has yet to be answered. One would think he’s recovered by now.

Having had to drop out of his Bellator 120 fight with Michael Chandler, Eddie Alvarez will have to defend his title against Will Brooks now.

Nate Diaz was willing to move up to welterweight and fight Matt Brown but that fight isn’t happening. A lightweight match is not set yet.