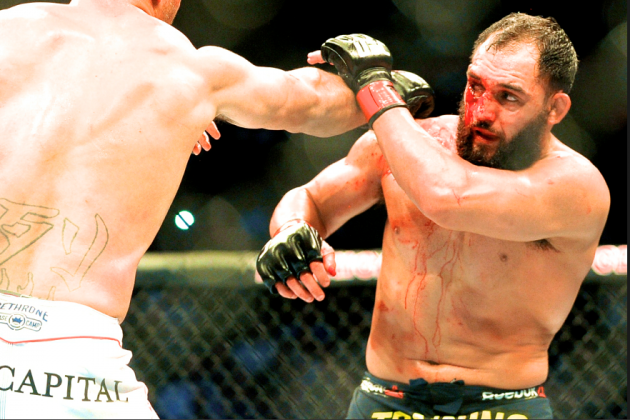 Please note the rankings are determined by a panel of MMA Freak writers. Also note the previous rankings (3/24/14) are in parenthesis:

Supposedly Johny Hendricks has returned to training this month and will face the winner of Tyron Woodley versus Rory MacDonald. Both of them pose several unique challenges for Hendricks but MacDonald poses a similar one that his teammate Georges St.-Pierre posed.

After his dominating performance against Jake Ellenberger, Robbie Lawler will be facing Matt Brown at UFC on Fox 12 on July 26th. This is a quick turnaround, however if Lawler is looking to earn a title shot relatively soon then these quick turnarounds are necessary steps.

Tyron Woodley was supposed to have earned his title shot against Johny Hendricks by defeating Carlos Condit but he will instead face Rory MacDonald at UFC 174. Hopefully a solid win against MacDonald will help people erase any notion of a fluke win against Condit.

Following his fight of the year performance match against Demian Maia, Rory MacDonald has the chance at a title shot against Tyron Woodley. This is something he probably never would have done when his team mate Georges St.-Pierre was the UFC champion.

Carlos Condit underwent surgery shortly after his UFC 171 bout with Tyron Woodley and it’s currently unknown how long he will be out. Hopefully he won’t be out for amounts of time comparable to Anderson Silva or Julianna Pena who both will be out for a year minimum.

After his domination of Jake Shields at UFC 171, Hector Lombard will be facing Dong Hyun Kim at UFC Fight Night 48 on August 23rd.

Matt Brown will probably be facing his greatest challenge to date in top contender Robbie Lawler at UFC on Fox 12 on July 26, 2014.

Having lost his last two fights straight, Demian Maia is in need of a rebound win when he faces Alexander Yakovlev tomorrow in Brazil.

Jake Shields was set to make his World Series of Fighting debut against Jon Fitch but an injury has delayed his debut to a later event.

By the time many read these rankings Ben Askren will have already made his One FC promotional debut against Bakhtiyar Abbasov.