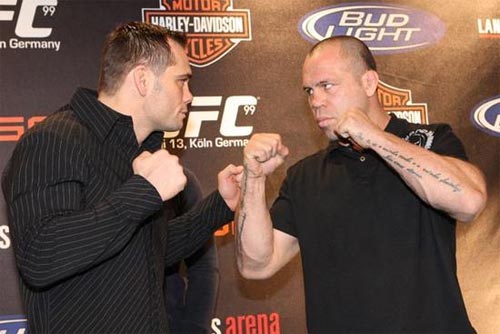 Franklin and Silva at the weigh-in’s  for UFC 99 – Courtesy of mixedmartialarts.wikia.com – click for source

UFC 147 will take place on June 23, 2012 in Belo Horzionate, Brazil. A lot of changes to the fight card and venue have occurred since the initial announcement.  At first the event was scheduled to go down in Rio, Brazil but that was changed since there was a UN conference taking place in the city on the same day.  According to the UFC, the main event was supposed to host the rematch between Anderson Silva and Chael Sonnen for the world middleweight title.  It was then moved to UF C 148 since Dana White stated the UFC’s concern that the venue wasn’t capable of hosting the event in the short amount of time given to pull it off.

The main event was eventually changed to the Ultimate Fighter Brazil Finale headlined by the coaches, Wanderlei “The Ax Murderer” Silva and Vitor “The Phenom” Belfort. These two have had a long storied rivalry over the years. They fought way back in 1998 at UFC: Brazil with Belfort coming out on top by Knockout in just 44 seconds.  It was Silva’s debut in the octagon and frankly no one was aware of Belfort’s trademarked ability to throw such fast and heavy hands.  Even though the middle weight title would not be decided at the event anymore, this middle weight tilt between two of the top contenders in the sport felt like a perfect time to revisit the past through bringing the rematch back to Brazil.

While training for this upcoming bout, Belfort suffered a broken left hand.  Dana White recently announced Rich “Ace” Franklin as the replacement.  This is also an intriguing rematch, this time from UFC 99 and like before, will take place at a catch weight of 190 pounds. Franklin won by unanimous decision the first time while both fighters won fight of the night honors as well.  Expect nothing less this time around since both fighters are known for their aggressive and exciting fight styles.

My Prediction: Look for the fight to be kept standing since both fighters prefer to keep it there. Franklin wins another unanimous decision.

Also, on the card will be the finals of the featherweight and middleweight tournaments from The Ultimate Fighter: Brazil.  The show is still airing yet it has surpassed the midway point leading towards the semifinal match ups.  In the co-main event, Fabricio Werdum will be facing Mike Russow in a heavyweight bout.  These two have not met before.

My Prediction: This fight has serious potential to go everywhere. Both fighters have been known to stand and trade yet I believe it will take place mostly on the ground since both fighters seem to be more comfortable there. To clarify, Werdum is a Brazilian Jiu-Jitsu fighter and Russow a wrestler.  Plans change though and this fight could be fought standing as well.   Russow might try that strategy, of which has brought him success in the past. Both fighters are on impressive win streaks and look to improve their stock in the dangerous UFC heavy weight division. Werdum will probably take this one but after the Todd Duffee fight I’ll never count Russow out until its over.