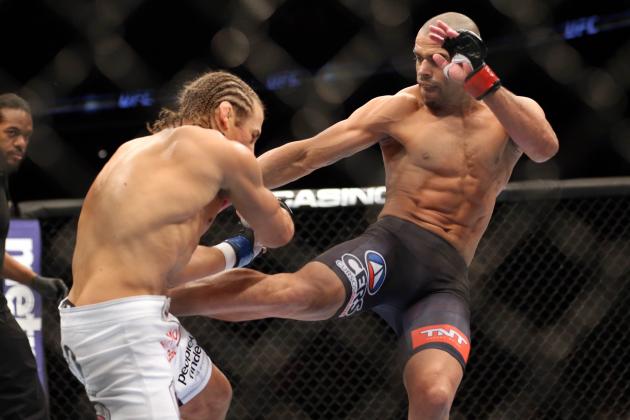 So Bellator’s pay per view debut was a pretty good one and we have the monthly UFC pay per view coming up this weekend. Let’s look at it:

Prediction: Jackson by strikes. Result: Jackson by decision. Once again this is why you NEVER LEAVE IT IN THE HANDS OF THE JUDGES!

Prediction: Shlemenko by strikes. Result: Ortiz by submission. To be fair Ortiz did out weigh Shlemenko significantly but we did see him back to at least part of his former self. The question now is how will he fair against younger guys more his weight?

Michael Chandler #10 Lightweight vs. Will Brooks

Prediction: Chandler by submission. Result: Brooks by decision. This is the second time in a row Chandler was on the wrong end of a split decision.

Prediction: Page by strikes. Result: Same. Page is definitely comparable to Anderson Silva in some ways though he showboats a bit.

Prediction: Barao by submission. There is no doubt that Renan Barao is the favorite going into this fight but is Dillashaw the man to upset?

Prediction: Cormier by strikes. This is looking to be a close fight as you have the beyond his age veteran against the undefeated prospect.

Prediction: Ellenberger by strikes. Despite his long layoff and Lawler’s hard striking, Ellenberger can be a crafty fighter on his feet.

Prediction: Rivera by strikes. Rivera is a hungry rising prospect looking to get an upset and climb up the rankings by defeating Mizugaki.

Prediction: Krause by submission. Both men are in dire need of a win if they want to remain in the UFC with the current high turnover rate.

What did you think of the Bellator pay per view and will you watch UFC 173 this weekend with some good matches? Leave a comment!