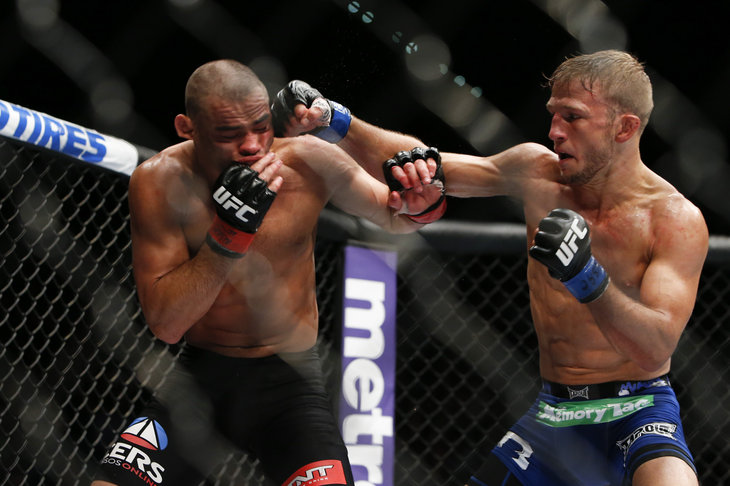 So we had a month of firsts, upsets, finales, and everything else in between. With that let’s take a look at the best of this month’s fights:

Originally Demian Maia had been preparing to face Mike Pierce. However an injury to Pierce resulted in Alexander Yakovlev stepping into replace the injured Pierce. Yakovlev had a grappling pedigree comparable to Maia’s in terms of Sambo. However, when they met Maia controlled the fight from the beginning to the ending bell. He wasn’t able to pull off the finish but got his rebound win.

This was the main event for Bellator’s inaugural pay-per-view and it delivered to it’s hype. Ever since Quinton “Rampage Jackson had joined Bellator there had been bad blood between him and Muhammed “King Mo” Lawal. It finally came to a head when the two met in the finals of the Bellator Season 10 Light Heavyweight Tournament at Bellator 120. It was definitely a back and forth affair with Jackson’s home town roaring whenever he got in some good punches in. Despite the controversy in the decision, the crowd cheered for Jackson’s win.

One might think this was just another fight on a UFC Fight Night event but it was executed really well. Samoan heavyweight Soa Palelei went into this fight with momentum on his side. He went into this fight and took down opponent Ruan Potts and began to ground and pound him. The ground and pound took its toll and eventually knocked out Potts. Palelei won the bout and had some good words after.

Up and coming heavyweight prospect Stipe Miocic was originally supposed to face former UFC Heavyweight Champion Junior dos Santos before the latter got injured. When that happened light heavyweight Fabio Maldonado decided to step in and faced Miocic on short notice. From the get go it was obvious that there was a power difference between the heavyweight Miocic and Maldonado. It took only thirty five seconds for Miocic to finish Maldonado in the first round. For his efforts Miocic received a Performance of the Night bonus award.

After one of the most controversial fights in TUF history, BJ Penn chose his first pick Anton Berzin to fight Patrick Walsh of Team Edgar. It was originally thought that because of Berzin’s finishing ratio and experience that he had the advantage over Walsh. While the first round did go the way for Berzin, Walsh came back in the second round forcing a third round. In the third round Walsh went in and was able to take Berzin down multiple times and initiate ground and pound. The decision went to Walsh and Berzin apologized for his lack of a gas tank.

Originally Joe Warren was supposed to face Bellator Bantamweight Champion Eduardo Dantes for the championship but Dantes got injured. Warren then faced faced Rafael Silva for the interim title however, it only became available to Warren when Silva failed to make weight. The fight initially started off with Silva actually out wrestling Warren for the first two rounds and controlling him. However, Warren rallied back in the third, fourth and fifth rounds to come back and win the interim title. He became the only two weight class champion.

4. Bellator 120 – Michael Page vs. Ricky Rainey – Knockout of the Month

This was the opening bout for Bellator’s inaugural pay-per-view and it certainly delivered. Michael Page had fought for Bellator once at Bellator 93 and the promotion was impressed enough to give him a fight on the pay-per-view. Page fought Ricky Rainey and proceeded to dismantle Rainey for the whole fight round. Then at the end of the first Page threw a punch that floored Rainey. It was a good introduction.

3. The Ultimate Fighter: Brazil 3 – Warlley Alves vs. Wagner Gomes –  Submission of the Month

It’s ironic how the coach who wasn’t a Brazilian in TUF: Brazil 3 was the man who had the most finalists on the show. Team Sonnen’s Warlley Alves had proved to be a brilliant prospect on the show having defeated both his preliminary and quarterfinal opponents. He continued his rise with a semifinal win against Team Silva’s Wagner Gomes by very quick guillotine choke within the first twenty seconds of the fight. He went onto use the same submission to win the finals. Clearly, Alves is a promising up and comer in the UFC.

Had this taken place in any other month this would’ve been the undisputed upset of the month. Former Bellator Lightweight Champion Michael Chandler was supposed to face current Bellator Lightweight Champion Eddie Alvarez in the conclusion to their trilogy. However a concussion to Alvarez forced an interim championship bout between Chandler and Will Brooks. Brooks despite the late notice rose to the challenge and made Chandler’s face a bloody mess by the end of the fight. While it seemed that Chandler had done enough to win three of the five rounds, the judges didn’t feel that way as they scored the bout for Brooks by split decision. One can only feel for Chandler who lost two close decisions in a row, however Brooks is the interim champion and deserves his match with Alvarez in the future.

Unless something crazy happens during the next six months this is definitely an Upset of the Year candidate. Renan Barao hadn’t lost for over nine years, was on a thirty two fight winning streak and was the reigning UFC Bantamweight Champion. T.J. Dillashaw on the other hand had two wins on his record, had fought only eleven times before, and was essentially a replacement for an injured Raphael Assuncao who was one of the two men to beat Dillashaw. Many including myself thought this was going to be either a quick finish or a one sided beating. While it was a one sided beating, no one thought Dillashaw was the one who would be handing out the beating. For his efforts, Dillashaw earned Fight of the Night and Performance of the Night bonuses as well as earning Upset of the Month at MMA Freak.

Do you feel that we missed any good fights in May? Feel free to leave a comment!